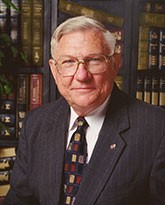 Prior to joining the University of Georgia, Dr. Buchanan served as a research scientist and teacher in the area of weed science. His research focus was in crop-weed interaction, weed biology and an emphasis on chemical control of weeds in agronomic crops.

As resident director of the UGA Coastal Plain Experiment Station, he led an effort to more efficiently recognize both research scientists and support personnel. He worked with faculty and staff to coordinate the Semisesquicentennial celebration for the Coastal Plain Experiment Station. Buchanan worked with the Georgia congressional delegation to secure funding to strengthen support for environmentally sound production agriculture; and after receiving this support, he worked with the Georgia Research Alliance to complete funding for the NESPAL facility in Tifton. He worked to change the station's policy of renting research plot land and this led to the purchase of necessary acreage for conducting research, including purchases of the Rigdon Farm, Lane Farm and Bull Test Facility.

Following his tenure as director in Tifton, Buchanan served as dean of the College of Agricultural and Environmental Sciences from 1995 until 2005. He went on to serve in the United States Department of Agriculture as the Under Secretary for Research, Education and Economics.