Tifton campus folks celebrated their own May 15, 2018 at the annual University of Georgia College of Agricultural and Environmental Sciences Tifton Campus Awards Ceremony. 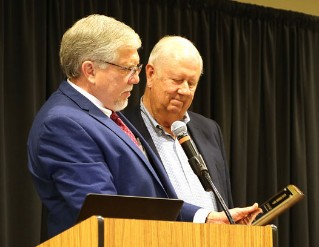 Jimmy Champion was presented with the 2018 Friend of the UGA Tifton Campus Award.

(Sponsored by the Georgia Cotton Commission)

John Bernard - Served as president of the American Registry of Professional Animal Scientists.

Peggy Ozias-Akins - Distinguished Research Professor 2017 - Professor of horticulture widely recognized as world expert on apomixis, the asexual production of seeds in plants. Ozias-Akins took a pioneering approach and applied a combination of forward genetics, genetic engineering and genomics to the problem. She was among the first to ever localize apomixis to a chromosomal region, and later she found the first plant gene associated with apomixis. Her work lays the foundation to begin research into systematic application of apomixis in plant breeding, which could have enormous impact on agriculture in both advanced and developing nations. Ozias-Akins has been equally successful in applying the biotechnological and molecular biology tools that she has developed to specific cases of crop improvement, most notably the peanut. Her decades-long focus on peanut improvement has had significant scientific, agricultural and economic impact.

Katherine Stevenson - Received the Outstanding Plant Pathologist Award for 2017 from the Southern Division of the American Phytopathological Society.