Tifton campus folks celebrated their own May 10, 2004 at the annual University of Georgia College of Agricultural and Environmental Sciences Tifton Campus Awards Ceremony. 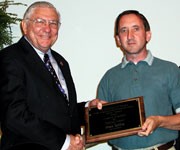 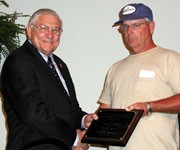 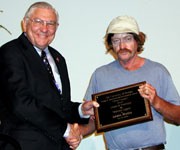 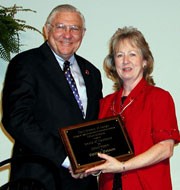 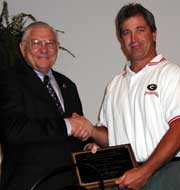 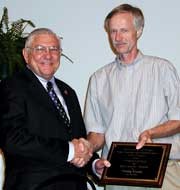 Joanna Craven - First student ever selected to the AgriLeaders program

Jorges Torres - Presented an invited paper on his dissertation research at the North Central Branch of the Entomological Society of America meeting in Kansas City in March, 2004; and Listed in the "2003 Who's Who Among Students in American Universities and Colleges"

Carol Ireland - Service to Research Award
Awarded to recognize individuals who would not normally be eligible for other Sigma Xi Awards, but who have, through unusual initiative and effort, made a contribution to science above and beyond that expected.

Awarded to recognize outstanding technical support of research and contribution to scientific achivement.

Lindsay Moore - Emory Cheek Memorial Scholarship
Awarded to a senior student of Tift County High School with an outstanding record in science and an interest in continuing their education in science.

Kaine Bondari, Experimental Statistics - Served as one of the coordinators of the "Statistics and Data Analysis" section - Monday AM Session of the 11th Annual Conference of the South East SAS Users Group (SESUG 2003), Sept. 22-24, 2003, St. Pete Beach, FL

Tim Brenneman, Plant Pathology - Received the Excellence in Research Award from the Southeastern Pecan Growers Association; and Elected Vice-President (President-elect) of the Southern Division of the American Phytopathological Society

Gerard Krewer, Horticulture - Dr. Krewer along with USDA and University of Florida collaborators involved in the Peach Breeding Project at the Attapulgus Station received a Plant Patent for two new peach varieties - 'GulfKing' and 'GulfCrest'

Duncan McClusky, Library - Promoted to Librarian IV; and Received Environmentalist Citation from Woodmen of the World

David Riley, Entomology - Appointed 2004 Chair of the Membership Committee of the Entomological Society of America, which is a national level appointment; and Received a joint extension publication award from the American Society of Horticultural Science for the "Georgia Vegetable Extension - Research Report," 2004

John Ruberson, Entomology - Program Chair for the Southeastern Branch of the Entomological Society of America in 2004; Subject editor for the journal Environmental Entomology; and Serves on the Editorial Board of the journal Biological Control

Plant Pathology: Albert Culbreath, Jim Todd and Steve Brown - Invited to write a review on "Epidemiology and Management of Tomato Spotted Wilt of Peanut" for the Annual Review of Phytopathology, Vol. 41:53-75

Joe Lewis, Crop Protection and Management Research Unit - Received the 2003 Jean-Marie Delwart Foundation Award (including a $10,000 prize) on December 13, 2003 in Brussels Belgium in recognition of outstanding work in the area of chemical ecology, particularly as related to plants, insects, and parasitoids (beneficial parasitic insects) and their hosts

Tom Maze, Administration - Purchasing Agent, received the distinguished honor of Administrative Employee of the Year (2003) for the South Atlantic Area on Feb. 11, 2004