Georgia vegetable farmers should be on alert as downy mildew disease has been spotted in at least three southern Georgia counties this spring. Additional counties could follow as weather conditions remain favorable for the disease into early June, according to University of Georgia Cooperative Extension plant pathologist Bhabesh Dutta.

Cucurbit crops — like cucumbers, melons, squashes and pumpkins — are susceptible to the disease. Dutta ranks downy mildew among the top diseases in cucurbit crops, along with Fusarium wilt and Phytophthora fruit rot.

Downy mildew disease can destroy plant foliage and cause the leaves to curl and die. Without healthy leaves and vines, a plant is vulnerable to blisters and sunscald during hot days, conditions most of Georgia has experienced since early May.

Much of the state has not experienced a substantial rainfall event since the weekend of May 11, and many growers have had no relief from temperatures that reached or eclipsed 100 degrees Fahrenheit.

“We really need some balanced days, not full-blown sunshine with 100 degrees Fahrenheit every day like we’ve experienced here recently, and also not heavy dew nights,” Dutta said. “We need some cloudy days, but most importantly, we need some rain.”

High temperatures during the day, followed by dew at night and in the early morning hours for the past three weeks, have led to the disease developing in cucurbit fields in Crisp, Decatur and Lowndes counties.

“Most of our growers are doing preventative sprays for downy mildew. We do have fairly effective fungicides that can manage downy mildew. I think growers are diligently following UGA recommendations and they should continue to do so,” Dutta said.

Growers need to be aware of what downy mildew symptoms look like and the damage it can inflict on vegetable crops. The pathogen thrives in wet, humid conditions and needs moisture on the surface of the plant for successful spore germination and further infection.

The pathogen that causes downy mildew can’t survive a hard frost, so it overwinters in frost-free regions like southern Florida. During May and early June, wind currents blow the spores into Georgia. 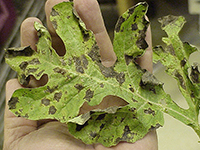