A new cockroach species from Turkey has been recorded for the first time in Georgia, according to University of Georgia College of Agricultural and Environmental Sciences entomologist Dan Suiter.

Suiter, a UGA Cooperative Extension specialist on the UGA campus in Griffin, Georgia, was alerted to the new cockroach by Howard Carter of Countryside Pest Control. Carter collected the cockroach in a trap while inspecting a site in Spalding County, Georgia, for pests.

“About a year ago, Howard brought me a sticky card with a bunch of different cockroaches on it and wanted to know what this one was,” said Suiter, who specializes in home and structural pests. “I wasn’t sure, and neither was Orkin’s national technical director, who was on hand when Howard brought the sample in.”

The experts thought that the cockroach was the native woods cockroach, the ones that typically are attracted to lights, Suiter said. “It looked like those, but then it didn’t,” he said. “We finally determined that it was the Turkestan cockroach, Blatta lateralis.”

The male of this species is gold-colored and about an inch and a quarter in length. The female is wingless and cherry-colored with two white streaks where the wings would otherwise be.

In 2017, Suiter sent a specimen of the cockroach to the UGA Museum of Natural History where Richard Hoebeke, an associate curator for arthropods at the museum, confirmed and documented the species.

“The significance of finding this cockroach in Georgia is that it’s known to primarily be in the Southwestern United States,” Suiter said. “It’s invasive and it’s been found in the U.S., but it’s never been documented in Georgia until now.”

The Turkestan cockroach may be new to Georgians, but across the Southwest U.S., it is well established. “People in the Southwest view this species of cockroach the way Southerners view the Palmetto bug,” he said. “They hate it.”

This year, Suiter equipped Carter with 10 cockroach traps to determine whether the Turkestan cockroach was still in the area.

Carter and his 11-year-old grandson, Bryce Sammons, set the traps and waited.

“I think he’s a future entomologist. He really enjoyed setting the traps, and he’s been taking bugs he finds to Dan for a few years,” Carter said.

Two days after placing the traps, Carter returned to Suiter with 50 Turkestan cockroaches. Suiter sent 20 specimens to the UGA museum, where they will be cataloged and entered into the museum’s collection.

“By now they are probably in other locations and they just haven’t been reported,” he said. “And, to an untrained eye, they just look like any other cockroach.”

So, what’s the difference between the Turkestan cockroach and other cockroaches Georgians are accustomed to seeing scurry across the kitchen floor? Not much, Suiter said.

Having been in the pest control business since 1986, Carter says the key to controlling pests is to have a watchful eye and keep your home or office clutter-free.

“You should really pay attention to what you see in your home,” he said. “Don’t create problems. If you have clutter, you are going to have problems with insects and rodents; it’s a given.”

When it comes to controlling cockroaches, no matter what their country of origin, Suiter refers people to UGA Extension Bulletin 1412, “Management of Pest Insects in and Around the Home.” This publication can be found at extension.uga.edu/publications. For a more extensive pest control manual, Suiter recommends UGA Extension Special Bulletin 48, the home and garden edition of the Georgia Pest Management Handbook. 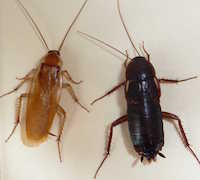 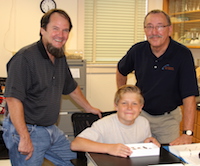 CAES students ready for experiential learning in 2020 with the help of the Ratcliffe Scholarship Posted on 12/23/19 by Chad Cain
While classrooms offer important skills and opportunities, not all lessons fit within four walls. Real-world experiences can be more valuable to a student's education than hours spent in lecture halls.

Triple Dawg Bethany Harris lands job at Callaway Gardens Posted on 12/09/19 by Sharon Dowdy
Bethany Harris has found the perfect job using her entomology and horticulture education from the University of Georgia College of Agricultural and Environmental Sciences. As assistant director of education at Callaway Gardens, Harris truly works out in the field, overseeing the butterfly center and educational gardens, managing over 200 volunteers, and teaching workshops for the public.