By Denise Horton for CAES News

This summer University of Georgia College of Agricultural and Environmental Sciences students traveled the world with help from the college’s Office of Global Programs’ Graduate International Travel Awards.

The awards, which were established in 2011, have traditionally provided roundtrip airfare to an international destination to only one graduate student. For the past two years, however, applications have been of such a high quality that OGP has expanded the number of awards given.

This year’s recipients, Alexandra Bentz, Diego Barcellos and Emily Urban, traveled a combined distance of 37,703 miles this summer to further their research and enhance their international experience.

Because Bentz’s doctoral research focuses on the genetic mechanisms that regulate aggression in birds, her experience measuring the stress hormone cortisol offered an opportunity for her to begin a new line of exploration with fellow UGA graduate student Daniel Becker, who is leading the research project.

“Daniel approached me last year about joining the project and helping with measuring the stress hormone cortisol,” Bentz says. “I became interested in the behavioral aspect of the project and, since I had never done work abroad, I was excited to go to Belize and to work side-by-side with 20 to 30 biologists from all over the world who are studying various aspects of vampire bats in this region.”

The project focuses on behavioral changes in vampire bats that seem to be occurring as a result of increasing agriculture in the once-remote rain forests of Latin America. As the bats become less afraid of humans, there’s concern that they may become more aggressive, which could lead to an increase in bat-vectored diseases such as rabies.

While the research project will enhance Bentz’s resume, her international experiences have provided several additional benefits.

“I’ve learned so much about what’s involved in working in another country, such as the government rules and regulations we had to follow in collecting and storing our samples and ensuring they were safely shipped from Belize back to the United States,” she says.

“A lot of the places where the bats roost are unexcavated Mayan temples,” Bentz says. “Because we collected our samples at night, during the day I could go to the temples and there was no one else there, just me and these massive temples. In addition to providing me the opportunity to expand my research, it helped me understand much better the conflict that is going on between archeologists who want to protect these areas and the farmers who are receiving subsidies to grow sugar cane.”

Barcellos, a doctoral student in crop and soil sciences, used his travel award to attend the Goldschmidt International Conference in Yokohama, Japan.

The conference, jointly organized by the American Geochemical Society and the European Association of Geochemistry, is the premiere international conference for the fields of geochemistry and biogeochemistry.

Barcellos’ research focuses on the effects of iron oxides in soil carbon dynamics.

“By better understanding the mechanisms of carbon and nutrient storage by iron and aluminum oxides, we can better manage soil nutrients and improve carbon sequestration in the soils,” he explains. “Moreover, a more profound understanding of soils is essential for achieving global food security.”

During the conference, Barcellos presented a poster of his laboratory research, demonstrating that the dynamics of reduction-oxidation fluctuations change iron reduction rates and directly affect the mineralization, preservation, and storage of organic carbon in soils.

He also spent three days with more than a dozen colleagues from around the world, learning about the geology and soils of Japan, specifically the area around Mount Fuji.

“It’s interesting to see this area because Mount Fuji’s eruption was only 300 years ago, so you’re seeing very young rock,” Barcellos says, explaining that it takes a minimum of 10,000 years for rocks to degrade and become soil.

Urban’s summer began with a trip to Romania where she spent two weeks as a co-leader of a study abroad course taught by agricultural communications assistant professor Abigail Borron’s course.

As part of a partnership with Heifer International, the students stayed with host families in the cities of Cluj and used video, photography and written narratives to document local agricultural and community development projects.

At the end of May, Urban boarded a plane south to Mozambique for a project with the Feed the Future Peanut and Mycotoxin Innovation Lab, which is headquartered at UGA.

Urban traveled throughout the Nampula and Cabo Delgado provinces with eight locally hired individuals, gathering data that will provide a fuller understanding of peanut production and its challenges, in addition to information on the marketing and consumption of groundnuts in Mozambique.

Urban, who has spent the past 18 months working with the PMIL team on the UGA campus, led a portion of the project that is focused on gender.

“Each day our team visits two new communities and interviews 25 households,” Urban said in an email from Mozambique. “The local enumerators conduct the survey (as I do not speak the local language –Makhuwa) and I serve as the field tech, ensuring data quality day-to-day and entering it into the database.”

“It is essential to understand how men and woman contribute in these processes. In this way, possible future interventions can better target who is actually doing specific activities and can help ensure that both men and woman are receiving equal opportunities,” Urban said. “Ultimately, I'll be compiling an overview gender analysis in relation to the peanut value-chain in these regions.”

“The three recipients of this year’s Graduate International Travel Awards have a wide variety of interests and goals,” says Amrit Bart, director of the Office of Global Programs. “And in each instance, their research is being dramatically enhanced by the opportunity to travel abroad. Especially when you consider the long-term outcomes that will likely result from their projects, this is an investment that actually benefits all of us.”

For more opportunities offered by the CAES Office of Global Programs visit www.global.uga.edu/. 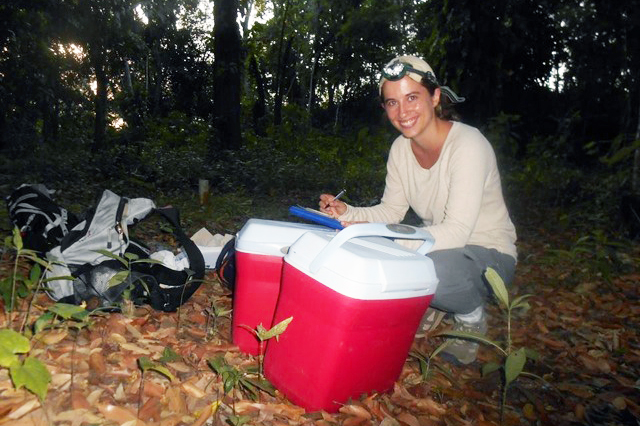 Georgia Ag Forecast to be held online Jan. 29 Posted on 12/17/20 by Josh Paine
Economists from the University of Georgia College of Agricultural and Environmental Sciences will discuss the effects of COVID-19 on farming, highlight agritourism impacts in the state, and give a forecast of top commodities for the next year during the annual Georgia Ag Forecast.
See More News Subscribe for Updates