Johnsongrass and frost can be bad combination for cattle

When the first frost hits, beef producers should be concerned for grazing cattle if the field contains johnsongrass. Cattle may suffer from prussic acid poisoning caused by this grass.

In normal years producers don’t have to worry about this problem, but Georgia experienced a lot of rain this summer. Repeated grazing by cattle prevents johnsongrass from getting established. But the abundant rainfall may have caused some situations where the grass grew faster than the cattle could eat it. It is also prevalent in many hayfields, and some farmers may allow cattle to graze those fields this fall. Therefore producers need to use caution.

Cyanide-producing compounds in living plant cells are converted to prussic acid when cells are crushed or otherwise ruptured. The prussic acid potential of plants is affected by species and variety, weather, soil fertility and stage of plant growth. Plants of the sorghum group, like johnsongrass and leaves of wild cherry trees, have the potential to produce toxic levels of prussic acid, especially when stressed during cold temperatures.

Prussic acid is one of the most potent toxins in nature. As ruminants like cows and goats consume plant materials containing cyanide-producing compounds, prussic acid is liberated in the rumen, absorbed into the bloodstream and carried to body tissues where it interferes with oxygen usage.

When lethal amounts are consumed, animals can die without visible symptoms of poisoning. Symptoms from smaller amounts include labored breathing, irregular pulse, frothing at the mouth and staggering.

Watch cattle closely if you have to leave them exposed to johnsongrass. Of course, you can’t save a dead animal, but those displaying symptoms prior to death can be treated. A proprietary sodium nitrite-sodium thiosulfate combination can be administered and repeated once if necessary. It must be injected intravenously and very slowly. The dosage and method are critical, so have your veterinarian’s emergency phone number close by. Most animals that live two hours after onset of symptoms will recover.

Football rivals UGA, Georgia Tech work together to advance agriculture Posted on 11/23/19 by Sharon Dowdy, Amy Carter
When the University of Georgia and the Georgia Institute of Technology interact, especially around Thanksgiving, they’re typically colliding on the football field for another historic round of clean, old-fashioned hate. But what you see on the gridiron is 180 degrees from the relationship the two schools share in Georgia farm fields where they work in harmony — and often full-fledged partnership — to improve the productivity and profitability of various sectors of Georgia agriculture. 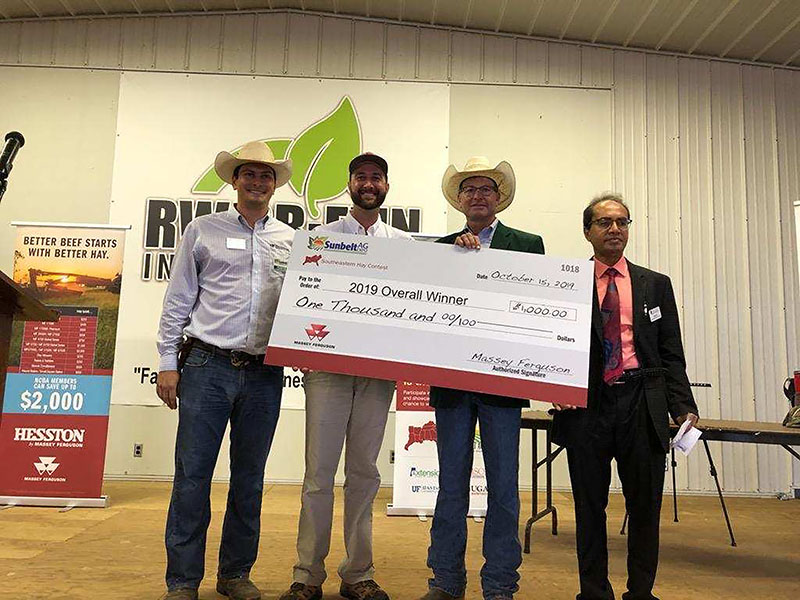 Winners announced in Southeastern Hay Contest Posted on 10/29/19 by Clint Thompson
A record 380 entries were submitted in this year’s Southeastern Hay Contest (SEHC), and the grand prize was awarded to Yon Family Farms of Ridge Spring, South Carolina. The winner received $1,000 from Massey Ferguson and the choice of the use of a new Massey Ferguson DM Series disc mower or RK Series rotary rake for next year’s hay production season.
CAES News
Georgia Farm Bureau awards $94,000 in grants to UGA scientists Posted on 10/11/19 by Clay Talton
The Georgia Farm Bureau (GFB) has awarded $94,000 in research grants to seven University of Georgia scientists and their research teams who are addressing production issues impacting Georgia farmers.
See More