AgrAbility helping farmers get back to work

For 50 years on his family’s farm in the Blue Ridge Mountains , Stanley has tended to 60-plus head of cattle and 50 acres of hay.

Eight years ago, though, Stanley’s way of life was interrupted by a rare disease. Stanley was diagnosed with Guillain Barré syndrome, a disorder that affects the muscle and nervous system and only one out of 100,000 people. He has since been confined to a wheelchair. Unable to fulfill his farming duties, Stanley looked for help from a unique organization — AgrAbility.

“The primary objective is to assist in any way we can to help farmers with disabilities to get back to farming or continue farming — in some cases, people with disabilities that want to start farming,” said Glen Rains, a co-director of the program and an entomology professor on the Tifton Campus of the University of Georgia College of Agricultural and Environmental Sciences.

“We have a lot of avenues in which we do that,” he said.

Stanley’s avenue was his tractor. Unable to move his legs, Stanley needed assistance getting into his tractor. AgrAbility helped obtain funding to retro-fit Stanley’s tractor with a mechanical lift that helps transport him from the ground to the cab. AgrAbility also installed special hand controls in the cab to allow Stanley to operate his tractor with relative ease.

“I’ve been grateful because (farming’s) all I’ve done all my life,” Stanley said.

AgrAbility works with Vocational Rehabilitation, an organization in all states that helps fund people with disabilities. Funding for projects also comes from grants, loans and/or the farmer. The state-wide program is operated by two UGA departments: the Cooperative Extension in the College of Agricultural and Environmental Sciences and the Institute on Human Development and Disability in the College of Family and Consumer Sciences.

“We work with farmers to find out, ‘Could you safely get back to farming, and if so, what can we do to help?’” Rains said. “We try to work with just about anybody to some extent.”

An estimated 25,000 to 35,000 of the 180,000 members of agricultural households in Georgia have a disability, Rains said. And, there are concerns over the rapidly-aging farming population, he added. The average age of a farmer is 58, whereas 30 years ago, it was 50. More than 20 percent of farmers are at least 80 years old.

The AgrAbility program assists in a variety of ways, whether it’s by helping establish a business plan to acquire loans, sending volunteers to help with crops after a debilitating health condition or providing assistive technology to make tasks easier. Such improvements include designing a spraying system for a farmer with eyesight problems and adding extended steps on tractors.

“Most of these things aren’t rocket science,” Rains said, “They’re just ways of coming up with solutions.

Stanley’s isn’t the only life changed by AgrAbility. In one case, AgrAbility helped a farmer with hemophilia. “He was getting knocked down by his goats when he was in the field. We developed a fence-line feeder. It’s a feeder that you hang on a fence. Now, he can feed (his animals) from outside the fence. That was one that was kind of unique,” Rains said.

Another farmer who benefitted from the program is Moultrie’s James Carter. Carter, who mostly grows hay on his 140-acre farm, suffers from Parkinson’s Disease.

AgrAbility was able to construct a walkway in a fence that would allow Carter to enter and exit the field with ease and without a fear that his animals would get loose. Carter’s tractors were also modified to allow easier access to the seat.

Carter could not be more thankful for AgrAbility’s assistance. “They were a very good help to me,” he said. “We sat down and talked about different ways of getting up and down on the tractor and stuff like that.”

AgrAbility has helped more than 50 Georgia farming families return to the field. It’s a statistic Rains takes great pride in.

For more information about the program, check out its website at farmagain.com

UGA Extension schedules three grape growers workshops Posted on 02/27/20 by Sharon Dowdy
UGA Extension is holding a series of workshops specifically for Georgia grape growers. The classes, set for March 3 in Carrollton, Georgia; March 5 in Dahlonega, Georgia; and March 17 in Ellijay, Georgia, will cover disease and insect control and other critical components of an integrated pest management program for vineyards. 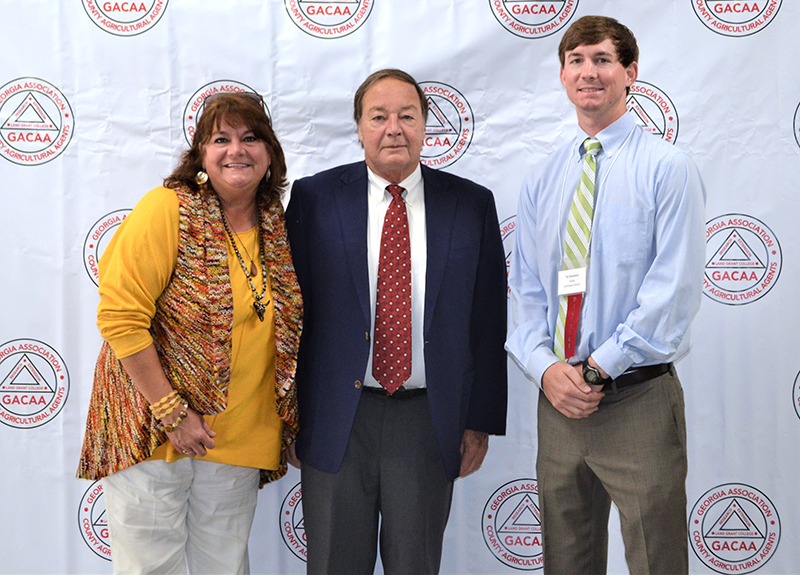 Wild shrub could help peanut farmers in Senegal Posted on 11/06/19 by Allison Floyd
Shrubs that grow wild in West Africa could be key in boosting yield and giving farmers assurance that they can make a profitable crop, even in the drought prone, food insecure Sahel region. Through the Feed the Future Peanut Innovation Lab, researchers are exploring how best to use two shrubs species in cultivated peanut fields in Senegal to improve the soil health, tap into moisture far below ground and lower soil temperatures.
See More